Roxanne Phillips: Describe your artistic process/technique.
Deanne Row: My best work comes from open-ended questions, and the vaguest of ideas, because the piece is guaranteed to change as I progress. Because I don’t have a mind’s eye, I’ll sometimes start with reference images to evoke a facial expression, mood or color combination. These images don’t end up in the final piece, but they allow me to project my ideas onto something in front of me while I work. If I have a theme that I am exploring, I will surround myself with visual and even written descriptions to jump start the process, then collect necessary references of form, texture, pattern and angles as I go along.
Often, I will start a sculpture with nothing in my mind at all. I build a generic “head form” and don’t think in advance about who it will become. I will likewise begin a cold wax or encaustic painting with layers of color to work into, knowing that something will suggest itself from these marks and colors. Because I am allowing these things to “float to the surface,” I can usually pinpoint what is happening in my life at that moment to spark the theme. I have come to accept that my subconscious is not very subtle!
In either case, my process is quite linear because I can only take the next step from what I see in front of me. I will make marks, add layers, carve into, add bulk, highlight, shade and color by building on what I have already completed rather than working towards a predetermined ideal. Giving myself this freedom was a huge step for me as an artist, because as a young person I didn’t have the skill or courage to let things evolve. I tried to plan everything out, which made for a lot of boring art.

R: What was it that first prompted your career/activity as an artist?
D: When I was in sixth or seventh grade, my mom taught me to elevate my pencil drawings by using charcoal to achieve a wide spectrum of black to white. I practiced this by drawing only eyes and noses for a while, and I loved the results. After that, my portraits evolved and I began to draw non-stop. By 8th or 9th grade, it was just assumed that I would pursue an “art career” (whatever that meant.)

Like many artists, I leave my work sitting in view for an extended period and adjust it here or there until it “feels” right. Eventually I realize that I have not made changes for a few days or weeks. This is when I know that it is saying what I want to say, in the way I want to say it. Conversely, I will sometimes know at that stage that the piece does NOT speak for me – I went terribly wrong somewhere – so I scrap it. This, too, is a valid sense of completion.

On a related note, I was completing a number of large paintings for my first solo show when we were ordered to stay at home. They were created as standalone works, but I approached them as an emotive backdrop to support my sculptures. Some were in early stages and some were “sitting in view” when the exhibit was eventually cancelled. Looking back, an ominous feeling had crept over many of them that was not the intention of the exhibit. But since it now feels right, I have actually pushed them further in that direction. I guess “complete” is always relative.
R: Has rejection ever affected your creative process? Explain.
D: No. My creative practice is too new to have received enough rejections to be of any influence.
R: If you had the chance to live during a different artistic movement other than now, which one would you choose?
D: At the risk of sounding overly Existential or Back to the Future-ish, it really all depends on whether I lived in that other time period in addition to now (time machine), or instead of now (parallel universe).
Expressionism, Surrealism and Conceptual art have been influential to my practice, but I don’t think that I would want to fire up my time machine and jump back to these periods. The ideas would still be evolving, so I would not experience them in the same way. I would probably enjoy setting the dial to the Art Nouveau period, because I love the beauty and precision of the art and architecture from this period. Imagine living with it all around me!

In a parallel universe, I might choose a prehistoric culture just beginning to conceptualize the female form as a symbol of fertility. Perhaps I would witness the creation of the early Venus sculptures. My perception of the world would be changed by experiencing visual art at such a pure and fundamental level – and I would totally dig living in a cave.
____________________________
Deanne Row is Award-winning artist based in the St. Louis area. She studied French language at Lycee Saint Exupery, Bellegarde, France, then continued her focus on painting at the Savannah College of Art and Design. Deanne’s paintings and sculptures have been presented in solo and group exhibitions throughout the U.S. Her work is included in the collection of Museum of Encaustic Art, Santa Fe, NM. Row’s work is represented by The Art Collective Gallery, Rogers, AR, and the Member Gallery of the Encaustic Art Institute, Santa Fe, NM. You can follow Deanne on Instagram here.
____________________________
Roxanne Phillips is an artist and art educator based in St. Louis since 2001. She earned a MFA in Printmaking & Drawing from Washington University in St. Louis and BFA in Painting & Drawing from University of North Texas. She has worked with Art Saint Louis since 2017 as Administrative Assistant and Installer and since 2018 as Master Printer for Pele Prints. She also works as adjunct art instructor at Washington University in St. Louis. Her works have been featured in numerous exhibitions throughout the St. Louis region including at Art Saint Louis, Crossroads Art Studio & Gallery, and St. Louis Artists’ Guild. Her work is currently available at Union Studio in St. Louis. She has served as exhibit Juror for several regional exhibits & art fairs. Roxanne is past Board member of St. Louis Women’s Caucus for Art. 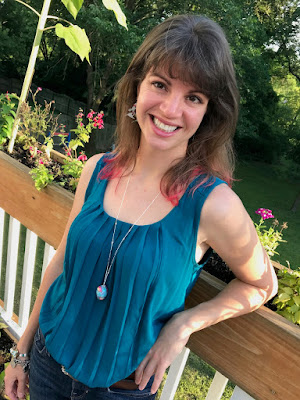 by Roxanne Phillips , MFA Printmaker and Master Printer, Pele Prints Artist Katherine Alexander. Roxanne Phillips: Describe your artistic process/technique. Katherine Alexander : Pysanky is the folk art of writing on eggs. Why eggs? They represent the renewing energy of spring, pristine symmetry in nature, and unstoppable force of new life. My technique is traditional; I use a wax-resist batik method to layer one color at a time onto a real unaltered eggshell. I’ve modernized this classic form by working on exotic eggs from large ostrich shells to tiny quail eggs for necklace pendants. Katherine Alexander. Pysanky artworks in-progress. R: Do you have a studio routine? Most creative time of day to work? Process of thinking or setting up before you begin making? K: During daylight hours I am mothering two energetic boys while allowing my mind to simmer on my next project. Once they are upstairs tucked into bed, I can get to work artistically. I often close the door to th by Rebecca Tochtrop " Avatar" January 14-February 8, 2008 East Central College Gallery , Union, MO Installation view: " Avatar ," East Central College Gallery. Photo by Mark A. Fisher. The children’s book Rumples and Tumbles Go to the Country 1 tells the story of two toy rabbits who leave the comfort of their window display in search of a real live rabbit. It is their first experience with nature, and their journey is full of encounters with unfamiliar animals. With each animal they come across, Rumples, the pink rabbit, is always quick to declare that this animal must be a real live rabbit. Tumbles, the blue rabbit, always replies, “If that’s a real live rabbit, then I’m the Queen of England!” They spend the rest of the time arguing over whether real live rabbits are pink or blue. “ Avatar ” is the name of a national juried exhibition currently occupying the Art Gallery at East Central College in Union, Missouri. In Hinduism, the Sanskrit word avatāra re 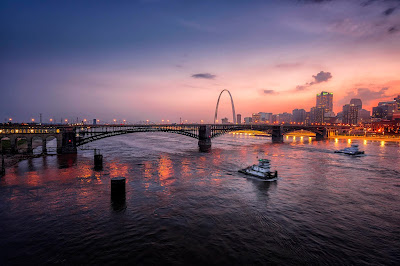 by Allison Carnell We present to you our fourth and final in a series of interviews with artists whose works are featured in our current exhibit at Art Saint Louis , " Art St. Louis XXXVII, The Exhibition ." Our 37th annual exhibit (on view November 6-December 16, 2021) presents works by 56 St. Louis regional artists from Missouri and Illinois. Art Saint Louis is located in downtown St. Louis, Missouri at 1223 Pine Street in downtown. Interviews for this post were conducted by Fall 2021 Intern Allison Carnell. We are pleased to introduce you to featured artists Greg Kluempers, Lina Zhang, and Ed Giganti. ____________________________ GREG KLUEMPERS Featured in “ Art St. Louis XXXVII, The Exhibition ” (November 6-December 16, 2021): Gregory Kluempers, Florissant, MO. “ Eads Bridge, The Arch and Tugs, Sunset, St. Louis .” 2021. Photograph on Metal, 16”x24”. SOLD. Artist’s statement:  “I have always wanted to get a Riverfront photo that included the Eads Bridge, Arch and Down