Greg Edmondson, a St. Louis based visual artist, shares with us some unique insights and stories from over four decades as a working artist. His outlook on the meaning of mastery and definition of success define how he has continuously stepped out into new positions, facing an ongoing amount of uncertainty, risk, and adventure. This commitment to the process of discovery is held above all else, with the honest explanation, that it may be either the best idea or the worst idea. Now in his 60s, with work in the hands of collectors like Halle Berry and Elton John, he’s learned that all he really needs is to be safe, to be fed and to keep making art, even when that means going through a time like this, “couch surfing the apocalypse.”

“You’re never going to do more than scratch the surface, so go right ahead and scratch a whole lot of surfaces if you can.”

From carving wooden sculpture to testing an old Polaroid camera, Greg’s experimented with a wide range of 2D and 3D media. “Playing in water color," his most continuous medium, led to his latest five-year focus in painting. He describes even his painting process to be more like drawing or sketching. Greg doesn’t believe in the notion of mastery, with the idea being that his goal should never be to make the perfect painting and then to repeat it or to quite, but instead to step further and further outside of what’s comfortable, to learn something new.


“Everything is part of some interlocking system, nothing exists in isolation.”

Originally following the footsteps of Jane Goodall, Greg went to college with the intention of studying the natural sciences. However, upon learning about the lack of opportunity for field research, he found a new way to connect with the process of discovery in the arts. It was an art history class that first captivated him with the idea of participating in a timeless conversation. Given this opportunity to express the things for which he had no words, he started making art with a more personal narrative that faded away as the years went by. Informed by his interest in natural science, the art became less and less about the person making it and more about the process for making art itself.


Greg’s approach is flexible as he respects and responds to whatever environment and life circumstances in which he’s been placed. During his time teaching at Thomas Jefferson School (2001-2015), he always stood up for the importance of arts education, working diligently to explain the invaluable problem solving and planning skills that art develops. While working full time and raising a daughter, his studio practice was slow and tedious. He relied on work  that could be stopped and started at any moment. He devised a series of systems and rules to follow, so that he’d never have to think about what to do next but at the same time, would never know what the final results would be. This was just his beginning of his letting go of authority and control in the process of making art.

In 2015, a change in plans led to Greg’s return to a full time studio practice. Thankfully, Greg seems to be most comfortable when and where anything can happen. “When I was 58 years old I put everything I owned into storage and got in my car and drove to this arts residency and everyone thought I was crazy. So basically for the past five years, I’ve been able to spend most days in the studio painting. Very few people would ever put themselves through the rigor, the challenges and even the tragedies I’ve had to go through in order to do this, but very few people can say, I’ve spent five years painting.”


Once a resident with Osage Arts Community, all rules were left behind. Abstract painting became the best way to ramp up the rate of exploration. The return to abstraction was in the spirit of, “ You're never going to be dealing with a what, you’re only dealing with a what if.” Greg prefers to work in the territory of unknowns.


“It’s the accidents and the differences that make for anything unique in this world.”

Greg’s time at Osage became marked by the balancing act of intention and response. Happy accidents always occur in the process of making things by hand. “I have my intentions, but I have to be open to respond to the little discoveries along the way, otherwise the work is only as good as I am clever.” After 5 years in a studio at Osage, something urgent happened in the fall of 2019 that required yet again a not so voluntary and rapid change in plans.
“My definition of being a successful artist is always elastic and evolving.”

Life as an artist has been, in Greg’s mind, both the best and the worst decision he’s ever made. To prioritize making art, he’s had to sacrifice career stability and numerous relationships in early years due to the combination of chaotic lifestyle and travel. The reason that studio artists are not better supported seems to be the same cause for Greg’s original abandonment of field study. If the end goal is not directly to make money or to increase “productivity," then there’s little to no support for possibility of discovery. “The weird thing about being in America today is that if you dedicate your life to something that’s not specifically about making money, it’s not just that it’s seen as weird, but as a form of heresy.” Greg sees this core problem rooted back to our society’s disconnection from the natural world. It’s hard to argue for the value of beauty and truth, when we’ve strayed so far from nature itself. The modern world is so over scheduled, over committed and overbooked that there’s simply no time for most people to let the mind wander and to let the hands work in the ways in which we used to live. Greg’s most recent series, “Dark Matter," came out of a residency grant with STARCO, where he had a tiny workspace and little to no internet access.

When forced to work with a new kind of focus, where more planning was necessary, Greg was able to finish nearly a painting each day. A positive note to this series of unstable living conditions, is that Greg seems to spark a new insight with each move. This latest series is thematically abstract, although the titles do depict quite a personal response to Greg’s prompt exit from Osage. The experience of successfully working in such a linear manner forever changed his outlook on his approach to workflow.


With all the uncertainty in the world today, Greg doesn’t know what the next year will bring him, but he’s hoping to have the opportunity to spend the fall semester in Texas teaching as adjunct professor at Stephen F. Austin University. For now, he’s sheltering in place with friends, applying for future residencies, and hoping the world will wake up to the value of beauty and truth, and learn to acknowledge the natural process for creative discovery.

Greg’s been kind enough to share two pieces of raw advice for any young artist.

1. “The first thing I would say, and I mean this from the bottom of my heart, is that if there’s something else that you can do and you can still feel like a satisfied human being by doing it, then for god’s sake go do that other thing.”

If you want to see more, check out Greg’s online gallery and follow him on Facebook where he’s always posting visual inspiration. 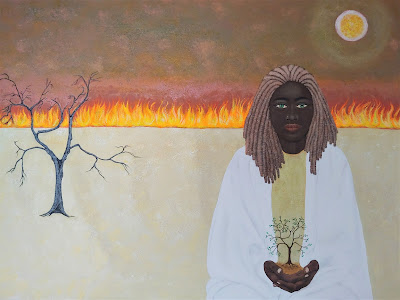 By Roxanne Phillips We are pleased to present a new series of interviews with artists whose works are featured in our new virtual/online exhibit presented by Art Saint Louis, " Hope " (February 1-April 1, 2021). You can view all the virtual exhibit as well as all 48 featured artworks on our website here and in our Facebook album here . We proudly introduce you to featured artists Adrienne Patel, MaryJo Clark and Sreelatha Varma. ____________________________  ADRIENNE PATEL Featured in Art Saint Louis’ virtual exhibit, “ Hope ”: Adrienne L.J. Patel, St. Louis, MO. “ Children of Promise and Hope…It is Time to heal – our earth .” 2020. Acrylic on Canvas, 36”x48”. $1,800 unframed. Artist’s statement: “I wanted to portray that Hope and Promise dwell in our children. They have the power to heal our earth. Her eyes are green...the color of healing, balance, growth, and life. Energy flowing through her hands manifests her intention, love, and selflessness. The healing takes p 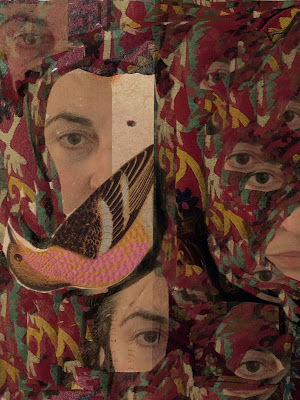 By Roxanne Phillips We are pleased to present our eighth (and final) interview with an artist whose work is featured in our Art Saint Louis virtual exhibit, " Hope " (February 1-April 1, 2021). You can view all of the featured artworks in this exhibit on our website here and in our Facebook album here . We proudly introduce you to Award of Excellence recipient Nancy Exarhu. ____________________________  NANCY EXARHU Featured in Art Saint Louis’ virtual exhibit, “ Hope ”: Nancy Exarhu, Clayton, MO. “ Bird .” 2021. Digital Artwork, 22”x28”. Not for Sale. This artwork was selected by the exhibit Juror to receive an Award of Excellence. Roxanne Phillips: Why do you make art? Nancy Exahru : Because I can not help it. I am constantly thinking of what I will make next. I work all day, everyday, alternating disciplines. I write in the morning, then I make ceramics, in the evening I make digital art or prints, the I write some more. I get unbearably bored if I do not make art. Ju 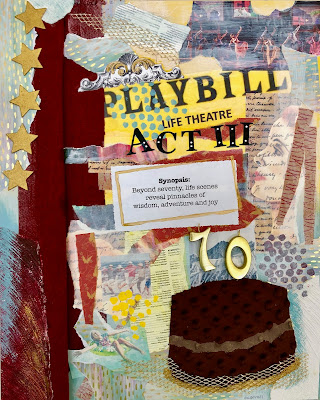 By Roxanne Phillips We present to you our final interview presented in conjunction with our " Maturity and Its Muse: Celebrating Artistic Experience 2021 " exhibit at Art Saint Louis (April 19-May 20, 2021). We are pleased to introduce you to artist Cynthia Correll. ____________________________ CYNTHIA CORRELL Featured in Art Saint Louis’ “ Maturity and Its Muse: Celebrating Artistic Experience 2021 ”: Honorable Mention recipient Cynthia Correll, Ballwin, MO. “ The Third Act .” 2020. Mixed Media, 20”x16”. SOLD. Artist’s statement: “As a book artist and communication architect, I have a passion for creating with mixed media. Turning seventy this year prompted me to seriously ponder the final phase of my life. How do I summon some enthusiasm for my future? My inspiration comes from the last and most important segment of a play—the third act. Isn’t this where we experience the most exciting scenes, and everything comes together?” Roxanne Phillips: Describe your artistic